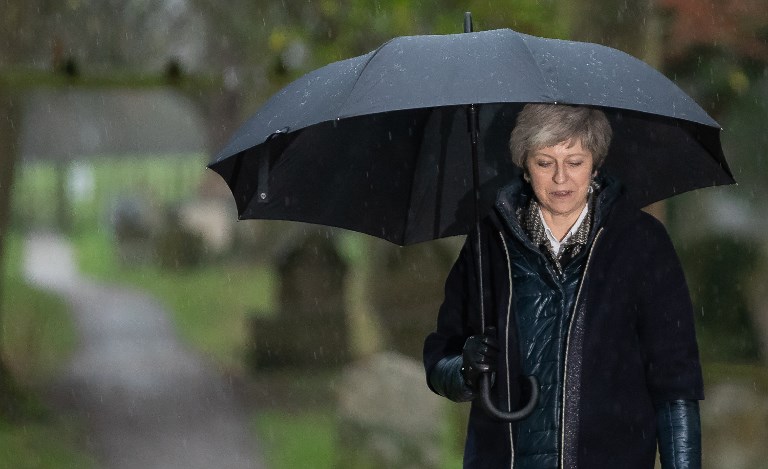 UK Prime Minister Theresa May has formally told the UK Parliament that the vote has been postponed because there is not enough support for the current backstop solution to avoid a hard border in Ireland. She has said she will go back to the EU to improve on the deal, especially with regards to the backstop. Rights groups in Europe have expressed anger that the vote was postponed.
British PM Theresa May has postponed the UK Parliament’s vote on the draft Brexit deal because of MPs’ “concerns” about the backstop, which could threaten “a hard border” between Ireland and Northern Ireland.

“The deal would be rejected by a significant margin,” said May, justifying why the vote will be delayed. “We will not seek to divide the house at this time.” The issue of the backstop is the one that has caused the largest division, says May, and prompted the decision to postpone the vote.

19:11 EU Council says it will not renegotiate backstop

EU Council President Donald Tusk says the EU27 is “not willing to renegotiate, including on the backstop” but “but we are ready to discuss how to facilitate UK ratification. As time is running out, we will also discuss our preparedness for a no-deal scenario.

I have decided to call #EUCO on #Brexit (Art. 50) on Thursday. We will not renegotiate the deal, including the backstop, but we are ready to discuss how to facilitate UK ratification. As time is running out, we will also discuss our preparedness for a no-deal scenario.

18:57 First media reactions from the EU to May’s vote postponement

“May pulls the emergency brakes” – headline in Munich’s Süddeutsche Zeitung

“Brexit, May’s government in chaos” – Italian daily Repubblica leads with that headline in its coverage

The Prime Minister postponing the #BrexitVote means the only sensible course of action is to withdraw Article 50 immediately.

People from every corner of our country continue to call for the British people get the final say – with the option to stay in the EU. #PeoplesVote pic.twitter.com/skXUEWtDHZ

“Parliament also needs to make its mind up and decide quickly if it’s going to go for a People’s Vote or revoke Article 50 unilaterally. It’s not just EU negotiators whose patience is wearing thing. EU 27 governments are already looking at their no deal contingency plans and the window to make any of these things happen is closing rapidly,” British in Europe told The Local.

18:41 Opposition minor parties want May out

Vince Cable, leader of the Liberal Democrats, and Nicola Sturgeon, head of the Scottish National Party, have said they would support Labour leader Jeremy Corbyn if he calls for a vote of no-confidence.

So @jeremycorbyn – if Labour, as official opposition, lodges motion of no confidence in this incompetent government tomorrow, @theSNP will support & we can then work together to give people the chance to stop Brexit in another vote. This shambles can’t go on – so how about it?

“If the PM can change her mind, so can the public.”

WATCH: @CarolineLucas nails it in her question to the PM – it’s time to demand a #PeoplesVote on the Brexit deal – it’s worse than our current deal inside the EU. Please RT: pic.twitter.com/KJ55hEOOsc

A key Brexit analyst with Dutch think tank Clingendael, Rem Korteweg, says the vote postponement is equivalent to the deal being voted down.

So, actually, we are now where we all thought we would be after tomorrow’s vote:

Deal has by all measures been voted down and May will now attempt to renegotiate.

Markets in Europe are reacting badly to May’s announcement of the vote being postponed. The Borsa in Milan, owned by the London Stock Exchange, is down 1.77%, according to Italian daily Repubblica. Stock markets in Paris and Frankfurt have also taken a hit today.

18:26 May in confident mood, despite postponing the vote

“I believe from discussions with my EU colleagues that they do want a deal,” says PM. The former EU Commissioner Romano Prodi made the same point in an interview with the Guardian recently in which he expressed the view that the EU Commission would be willing to renegotiate to get a deal.

Most interventions from MPs are now pushing for a new date before Christmas, but PM May is not giving in to specifying a new date for an MPs vote on Brexit. Reactions to May’s announcement to the UK Parliament that the vote will be postponed are ongoing.

18:21 Further reassurances from France for Brits

“Just before Theresa May spoke in the Commons, Nathalie Loiseau (ED: France’s Europe minister) was speaking in the Assemblée nationale plenary debate on the projet de loi. She stated very strongly that British residents in France would be ‘as welcome tomorrow as they are today’ and that we shouldn’t be the ‘hostages of Brexit’. So some reassurance for Brits in France on a difficult afternoon,” RIFT’S Kalba Meadows told The Local in a written comment.