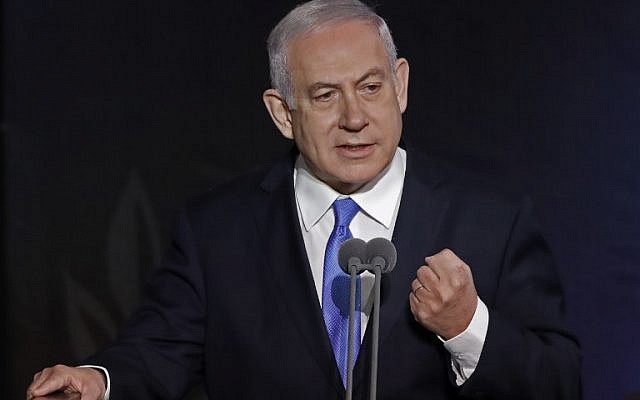 Prime minister accuses Tehran of lying about advisers and lying about satellite launch, which he says is part of ICBM program.

Prime Minister Benjamin Netanyahu on Tuesday warned Israel would press ahead with its campaign against Iranian entrenchment in Syria, days after a rare acknowledgement of a bombing raid in Damascus.

Speaking at a ceremony at army headquarters in Tel Aviv to install new IDF chief of staff Lt. Gen. Aviv Kochavi, Netanyahu mocked claims from Tehran that it did not have a military presence in Syria but only advisers.

“So I advise them to get out of there quickly because we will continue our offensive policy as we promised and as we do without fear and without pause,” the premier said.

He added that the country was ready to fight and win a “multi-front war,” in apparent reference to concerns over twin tensions on the southern and northern borders.

Netanyahu also accused Iran of using its nascent space program as cover for ballistic missile development, as suspected by many in the West. Hours before Netanyahu’s remarks Iran said it had launched a satellite that had failed to reach orbit.

He alleged the “innocent satellite” was actually “the first stage of an intercontinental missile” Iran is developing in violation of international agreements.

On Sunday, Netanyahu openly admitted that Israel bombed Iranian targets in Damascus over the weekend. The strike destroyed a number of weapons caches in the Damascus airport, Netanyahu said.

Israel typically refrains from commenting on individual airstrikes in Syria, but does generally acknowledge that it carries out raids against Iranian- and Hezbollah-linked targets in the country.

Over the weekend, outgoing chief of staff Gadi Eisenkot said for the first time that Israel had dropped thousands of bombs on Iranian targets in Syria, breaking the silence on the breadth of the campaign.

Some analysts see the shift in policy as a sign of growing Israeli boldness, with Iran and Syria generally refraining from responding to the airstrikes. Israel is also concerned over perceptions that it may curb its campaign under pressure from Russia as the US pulls troops out of Syria.

Responding to Netanyahu’s statement on the Damascus airport bombing, Iranian Foreign Ministry spokesman Bahram Qasemi said Monday Iran did not have any military bases or military presence in Syria, and was only in the country “at the request of the Syrian government for advisory mission and fighting the terrorists,” according to a report by Iran’s official news agency, IRNA.

Israel has accused Iran of seeking to establish a military presence in Syria that could threaten Israeli security and attempting to transfer advanced weaponry to the Hezbollah terror group in Lebanon.